In between working on serious stuff that takes up my time, I look at images. 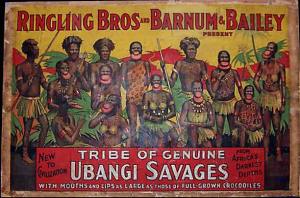 Some of these images may seem as though they are not related – but they actually are – like these African circus “freak” posters from the early twentieth century and their counterparts from contemporary body mod subcultures in the United States. So who is the savage? I like colorful illustrations and advertisements of shows, performances, and other attractions that people pay good money to see. In a society that thrives on viewing images for entertainment and education, we have reached a point of no return with the commodification of visual things. But you don’t always have to pay. 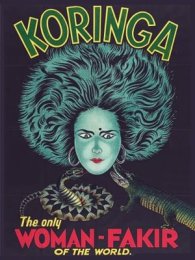 Today’s post has something vaguely to do with race and religion, as I muse about the ways that the meanings of images are transformed as other images come into play. It is a variation on how the viewer constitutes the subject. We followed this process in an earlier article on the transformation of a legendary European circus performer into one of today’s most revered African goddesses. How did it happen? Look, it’s all in the seeing. Consider the case of an international stage magician from the 1930s with the fabulous name of Koringa. I enjoy the defiant certainty with which the poster screams that Koringa is the only woman-fakir of the world! because even though the real Koringa begins her career as an unknown French actress/dancer named Renee, her professional identity maps easily onto other sensational visions of race and gender, in particular, parodies of Africana spiritualities. One of these is what I call the “white Voodoo princess.” 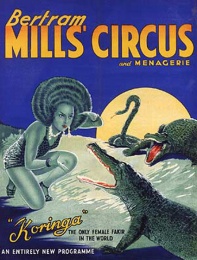 Never mind that Koringa is promoted as a yogini or adept of the ancient Indian arts of hypnosis and mind-over-body practices. Watch as her visual presentation conjoins with versions of the female Tarzan and jungle girl memes that were popular in American cinema in the 1930s, 40s, and 50s. These were films that featured grown white women in leopard-print swimwear, throbbing tom-toms, hairy deciduous vines, and dangerous set locations in the darkest regions of Africa. The Voodoo component was deployed as a mystical essence that endowed the white maiden with athletic prowess and a telepathic affinity with ferocious animals. With broken English she speaks. She is a crocodile whisperer. But how did she become such a prodigy? Jungle princess Voodoo is not an innate ability, nor is it a religion. It is acquired collaboratively from multiple sources. 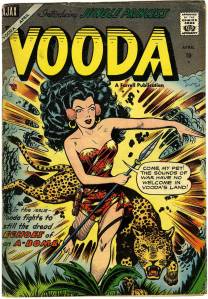 The white woman attains her powers pursuant to an encounter with a spooky fetish or juju charm, or after being schooled by indigenous masters – for she is always an orphan, an island castaway, raised by witch doctors, gorillas etc. And yet, we are suspicious. We perceive this Voodoo as inauthentic, and somehow deracinated. Watch as  blackface Voodoo is presented as the real alternative, a terrible and duplicitous power that even threatens to overwhelm the white female protagonist, as in this clumsy and hapless sequel to the Sheena Queen of the Jungle film:

Did you catch the dreadful secret of Voodoo at the end, especially the part about the image which seems as though it was written for this blog? I will give you a clue: there is great power in the image. And with forty-odd films of this genre, it is clear that the American film industry found great power in the white Voodoo woman theme as well. Her curious display of whiteness, sexuality, and strange African mysticism designates her as an anomaly, a “freak,” as much as any circus spectacle. Let’s look at Koringa again. 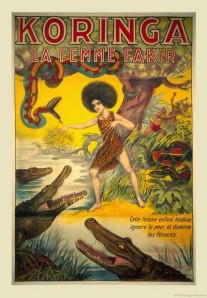 What’s most surprising about her visual transition from Hindu snake charmer to Jungle princess is how seamlessly her physical characteristics transmute into distinct racial elements. Take her amazing bushy cloud of hair. This style was popularized by P.T. Barnum in the 1800s as part of his exhibition series of freak performers and human oddities known as circassian women. Barnum’s professional staging of what was considered to be the epitome of female beauty may strike us as bizarre for its miscegenated aspects, but make no mistake, mythic ideals of white womanhood charged the popular imagination in this period. Barnum’s contrived displays would hold great promise for the future staging of race and gender themes in American theatre, photography, and film. We understand these images to be evocations of Orientalism, reflecting the West’s preoccupation with fantasies of the exotic, the barbaric, the sexual, and the mystical aspects of the Other, all rolled into one ethnocentric vision against which white identity was measured. How else could white people appropriate desirable physical features from the non-white darker races of the world except by embodying them in performance, thus recreating their “essence” in transfigured and consumable visual forms? 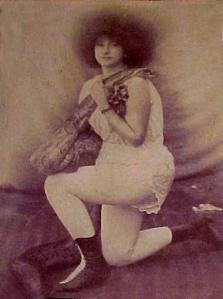 The virtuoso who assumed an Indian identity as a Hindu “fakir” or adopted an Afro hairstyle befitting a Voodoo princess took part in the age-old performance of cultural masquerade, played for amusement and profit.  And although subsequent jungle queens rejected the Afro style in favor of the long, smooth locks associated with “white” hair, a sartorial transition had occurred that bears noting. As in other contexts we must acknowledge that a brazen plundering of the cultural resources of black and brown people has taken place, and whether it is with hairstyles, music, or spiritual practices, there is great value in those  borrowed forms. And so, one hundred years later the popular circassian hair style would become detached from white femininity, and black women of the Soul consciousness era of the 1960s would claim it for a different kind of identity, and for their own purposes.
Here the natural hair was also linked to performance. With this display, ethnic pride and racial heritage were visibly marked by her hair as the domain of the “authentic” black woman. 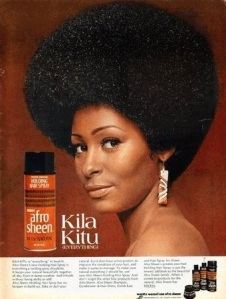 (This period was also associated with creative appropriations of Africana spiritualities as well – and not just specious and fake “Voodoo.”) It is interesting to see that as with the circassian beauties and the jungle princesses, “black” hair was adopted by women as a signifier for a kind of primitive beauty. The Afro became a gendered, racialized style that celebrated and displayed black women’s taming, if I may, of what had been uncivilized – sort of like the wild beasts that accompanied the Voodoo princess on her daring adventures. Does Koringa, in all of her guises, perform the part of the    woman who ably wields spiritual/supernatural power to civilize and tame the Other, or that which is wild? Why not? she is, herself, a liminal creature.

Embedded within these images are fascinating discourses of race, gender, and sexuality, all warped by the contradictions and the failed logic of colonialism, which pitted the savage Other against the forces of civilization. With the Voodoo element as the mystical link between savagery and civilization, the virtuoso performs a capable mimesis of the black or brown body, but it is one that we recognize as false, confusing, and ultimately inadequate to that which only the “real” primitive can deliver. The self-presentation of Koringa and other circus performers as racial Others reinforced long-established ideas of white supremacy, but also tantalized audiences with hints of the transgressive pleasures of racial imitation. 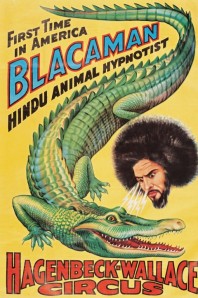 Oh and what a spectacular presentation of hair, and not just for women, either! We delight in this image of a Hindu gator-hypnotist in the 1920s who went by the supremely ironic name of Blacaman. And although the poster claims that it is his first time in America, the joke is on us, as he turns out to be one Pietro “Black Man” Blacaman of Calabria, Italy, of African descent, and not an Indian fakir at all. So everyone is happy so long as he gets to play the role of a hairy Voodoo prince, a captivating performance with its mystical delights and goofy jungle drama. I am interested in the Voodoo trope as it is replayed in various presentations of blackness, whiteness, and gender in American culture. Next time we will turn to the dark and lovely maidens of our recent and most venerated form of popular literature – the comic book. I will be posting more images, so please stay tuned. The seeing is free.